Jan 31 – ‘Road Trippin:’ Twentieth-Century American Road Narratives and Petrocultures from On The Road to The Road 🗓

“‘Road Trippin:’ Twentieth-Century American Road Narratives and Petrocultures from On The Road to The Road” examines late-twentieth century U.S. road narratives in an effort to trace the development of American petrocultures geographically and culturally in the decades after World War II. The highway stories that gain popularity throughout the era trace not simply how Americans utilize oil, but how the postwar American oil ethos in literature, film, and music acts upon and shapes human interiority and vice versa. Roads and highways frame my critique because they are at once networks of commerce transportation and producers of a unique, romantic national mythos that impacts American literary and extra-literary textuality throughout the late-twentieth century. My methodology draws on literary, environmental, and material culture studies, but rather than dwell on the substance itself, the project traces oil’s presence in the aesthetic stuff of our lives: the novels, films, television shows, popular songs, and memoirs that structure conceptions of individualism, freedom, mobility, race, gender, and sexuality. In doing so, I rely heavily upon interdisciplinary lenses derived from literary, film, and affect theories. Petroaffect, or the ways in which oil and oil culture shape and reshape human interiority, reveals how people are in a sense manufactured by oil as psychological or even spiritual beings. Tracing petroculture’s trajectory throughout late-twentieth century road narratives—road novels, outlaw trucker movies, popular music, memoir, and apocalyptic fictions—demonstrates that oil’s material, ideological, and environmental effects and affects are vital to the formation of the petromodern American.

Scott Obernesser received his PhD in English Literature from the University of Mississippi, specializing in Environmental and Southern Literatures. Scott is currently a visiting lecturer at the Obama Institute for Transnational American Studies at JGU Mainz. 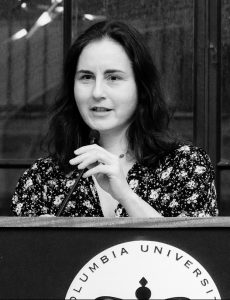 In 1915, sociologist Robert E. Park described the modern city as “a mosaic of little worlds which touch but do not interpenetrate,” a spatial—and racial—imaginary that had already been expressed in Jacob Riis’s portrayal of the Lower East Side as an “extraordinary crazy-quilt” of ethnic immigrant groups in his 1890 exposé How the Other Half Lives and that was reinforced in the 1930s by the Home Owners’ Loan Corporation “redlining” maps. My research considers how the entanglements of geographic imaginaries and material conditions serve to racialize urban space, emphasizing the role of narrative in both upholding and homogenizing geographic representations but also in critiquing those representations by revealing the very narrativity of their construction. I focus on Chicago in the early twentieth century, where the “Chicago School” sociologists taught literature as a window into the urban psyche and interacted with local authors such as Richard Wright. This was, significantly, a moment at which Chicago was America’s most iconic and rapidly growing city, a period during which the intersecting histories of American urbanism, immigration, and the Great Migration also laid the groundwork for the city’s notorious—and still existent—segregation. Bringing together narratology and cultural geography, my talk will theorize the relationship between narrative mapping and racialized space by bringing together turn-of-the century realist novels (Henry Blake Fuller’s The Cliff-Dwellers and Theodore Dreiser’s Sister Carrie) with Chicago Black Renaissance short fiction (Marita Bonner’s Frye Street stories).

Sophia Bamert is a PhD candidate in English with a designated emphasis in Writing, Rhetoric, and Composition Studies at the University of California, Davis. She holds a BA in English and Environmental Studies from Oberlin College and an MA in English from UC Davis. Sophia is currently a visiting lecturer at the Obama Institute for Transnational American Studies at JGU Mainz.

Dec 13 – Leaving the Land Before Time: The Planetary Presence of Indigenous World Literatures 🗓

Too often, the pull of the policy audience has resulted in decolonization being enlisted as a hollow metaphor that seeks to reconcile settler complicity and secure settler futurity. This seduction has immense consequences for the substance, style, and politics of research in Indigenous studies. As such, the field of Indigenous literary study cannot blindly adopt the agendas of those making or administering policy. I advocate that a primary impediment to an increased consciousness about Indigeneity lies in how we study the contemporary literature of Indigenous peoples. This requires a reconceptualization of Indigeneity away from its boundedness to specific lands and pasts that valorize ties to first contact, instead embracing the reality that Indigenous peoples are a contemporary presence throughout the world. In response to this reimagining, my research investigates: (i) how the study of Indigenous world literatures might destabilize characterizations of absence that isolate Indigenous peoples to particular places and pasts, and (ii) how these literatures can entrench Indigenous presence as planetary phenomenon. I make this intervention by modeling a cosmic methodology that recognizes Indigeneity and Indigenous peoples as omnipresent and thriving; it is, at its heart, a project that contributes to the ongoing work of decolonizing literary study itself through the minds of those who study and teach literature.

Sister Jean Dolores-Schmidt, a 98-year-old nun and team chaplain for Loyola University Chicago, became a sensation in both social and traditional media during her school’s underdog run to the 2018 USA collegiate men’s basketball tournament semifinals. In this presentation, I examine her rise in popularity, and subsequent backlash to that popularity, through the lens of social psychological theories on aging and stereotypes, using Twitter as a basis for qualitative analysis.

Scott King is Associate Professor of Psychology at Shenandoah University in Winchester, Virginia, USA and Visiting Lecturer in the Obama Institute at JGU Mainz.