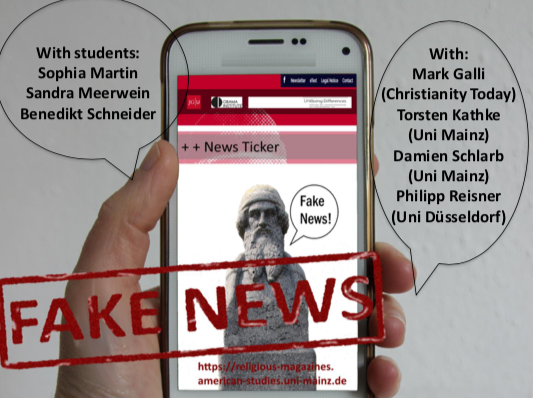 The panel, “Fake News! The Media Debate in the United States,” will take place on January 17, at 6 pm, in the conference room (135) of the Helmholtz Institute, Staudingerweg 19, Johannes Gutenberg University Mainz.
Since “fake news” is an oft-used term in contemporary debate, used to both criticize shortcomings of the information age and employed as an accusation that discredits some media outlets, we want to engage the issue from several perspectives.
The panel will include Mark Galli, the editor in chief of the evangelical Christianity Today (who will be in Mainz for the workshop on religious magazines), who will speak to the question what challenges the “fake news” debate brings to religious journalism and how he and his staff address it. The panel will also include Dr. Philipp Reisner from the University of Düsseldorf – who will provide historical context on the debate, Dr. Torsten Kathke from the University of Mainz – who will discuss the role of social media, and Dr. Damien Schlarb – who will focus on “fake news” as a cultural phenomenon helped along by economic and technological factors. Students Sandra Meerwein, Benedikt Schneider, and Sophia Martin are ready to lead the discussion with questions and examples from today and from history.
You can find the poster for the event here.
Scheduled Events News